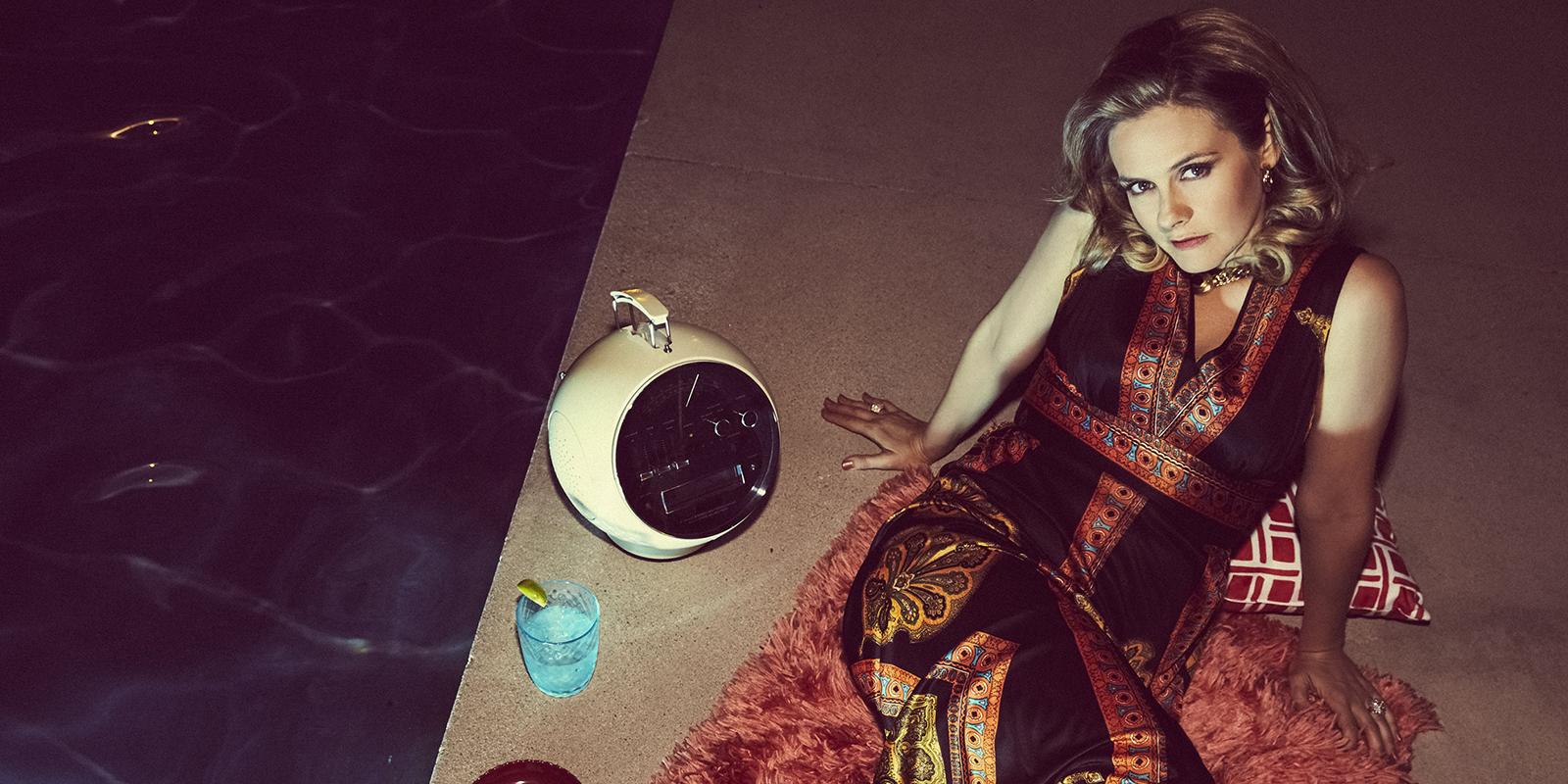 Native ads replicate the look and feel of the shows to keep viewers watching.

Set the time machine for 1975, Beverly Hills. American Womanpremiers June 7 on Paramount Network, and with it comes Farrah Fawcett-style hair, typewriters and men in short shorts.

The fashion and decor are just as entertaining as the storyline, about a glamorous mother of two who must return to work after discovering her cheating husband has bankrupted them in a Ponzi scheme. When the show cuts to its first commercial break–for Bayer’s One A Day® Women’s—the ‘70s theme continues. The jingle is reminiscent of John Denver and Karen Carpenter songs. Men have long sideburns. A woman on an exercise bike wears a leotard and tights. A yellow push-button phone sits on a desk.

It’s hard to tell if it’s part of the show or an advertisement. And that’s the idea.

While native ads (also called show-specific ads)—commercials that are designed to fit seamlessly into a show because they replicate the look and feel of the program they air during—might not be new, today’s media landscape certainly is. Memorable examples from season’s past include Unilever ads during Mad Men’s fourth season and Sprint’s serialized ads during Desperate Housewives about a cheating spouse, called “Another Desperate Housewife?”

But now, there’s more competition than ever for audience attention, thanks to streaming services and on-demand options that have fewer commercials, if any. So advertisers must find creative ways to improve the commercial viewing experience for viewers and brands alike. Native ads are one solution. Others include reduced ad loads and micro ad pods, so audiences see fewer ads throughout a program or ads as short as five seconds.

"This [Blockers] ad is very much a critical part of television advertising’s future."

“This industry is in constant disruption,” says Michelle Zoni, senior vice president of integrated marketing at Velocity, Viacom’s in-house branded content studio. “It’s no secret that viewers are watching when they want to watch. The question for us is, how can we ensure viewers are not hitting the fast-forward button when they watch on DVR. The solution is to create content that’s engaging.”

That’s what Velocity did for a series of ads created for Lip Sync Battle for Sonic, Pepsi and Crest. The Pepsi Generations spot opens with Lip Sync’s crew disassembling the set as the voiceover says, “Stay tuned, there’s more Lip Sync Battle excitement coming up.” The camera pulls back, showing the TV airing Lip Sync Battle. The singer Tinashe appears drinking Pepsi, then walks through a door into a bedrooms from the ‘80s, ‘90s and early ‘00s. The Pepsi logo remains on the screen throughout and it closes with the voiceover, “Keep watching Lip Sync Battle with Pepsi. This is the Pepsi that celebrates every generation.”

“The ad feels truly native to that show,” says Zoni. “The content feels like the show. It’s leveraging the same format, popular music and recognizable talent.”

That’s the key to making it memorable to audiences. “Advertising is as much about context as what you’re saying,” says Dean Challis, group communications strategy director at ad agency Droga5. “This is just an interesting way to bring it to market.”

The conversation created by these ads in news articles and social media posts extend the life— and lift—of the spot. Leading up to the launch of the campaign, Tinashe promoted the spot on her social handles. There were 7.2 million Viacom-owned channel impressions across social and 72k total engagements across Facebook, Instagram, Twitter and YouTube.

For the Crest Pro-Health version of the ad, a man brushing his teeth in a robe is transported to the Lip Sync Battle stage, where he raps about Crest whitening his teeth.

This 26-year-old female participant in a Viacom focus group for reaction to the ad summed it up:“The commercial was relevant to the show it was sponsoring, which is really cool. It’s like they tailored the commercial to fit fans of this particular show.”

Says Viacom’s Valerie Bischak, executive vice president, partner solutions: “Great content will get people to watch whether it’s a commercial or our own programming. What clients are asking for is, ‘Can you give us the most uncluttered platforms to tell our stories and reach the right audience.”

In another example, Cartoon Network’s Rick and Morty are the stars of commercials for Carl’s Jr., Instagram and Old Spice. And in a truly integrated ad for Kentucky Fried Chicken, cast member Connor Ratliff reenacted his audition to become the new Colonel Sanders, during an episode of The Chris Gethard Show. A line at the bottom of the screen reads, “from The Chris Gethard Show and KFC.”

Velocity capitalized on the popularity of Martha & Snoop’s Potluck Dinner Party with the series “Snoop’s Hot Box Office,” which runs on linear and the network’s social handles. The rap star sits in the front row of a theater, describing movie plots as scenes from the films are shown on screen. His review of Kingsman was viewed 27.2k times on Twitter and nearly 2.5 million times on Facebook.

For the movie Blockers, Velocity and Comedy Central created an investigative report about butt chugging, something John Cena does in the movie, that ran during the first commercial break of a Daily Show episode. Daily Show correspondent Ronny Chieng reported the piece that also featured the scene with Cena ingesting alcohol from a hole that isn’t his mouth.

"This ‘native’ solution is interesting in that it’s another innovative way to break through the TV model that’s been the same for so long."

“This [Blockers] ad is very much a critical part of television advertising’s future,” says Eli Chapman, vice president and managing director of media at R/GA, a digital agency. He points to viewers who usually leave the room during commercial breaks and those that fast forward through commercials. “They’re not going to skip over these ads,” he says.

Dominique Folacci, media director at R/GA, adds, “The model for TV spots has been the same execution forever—with the exception of the Super Bowl. Coming out of the upfront season that happened recently, it seems like networks are trying to get advertisers more excited about linear. This ‘native’ solution is interesting in that it’s another innovative way to break through the TV model that’s been the same for so long. Its a direct response to say, Hulu, which has a lower ad load. If you have two spots instead of 10, in theory they’re more engaging and viewers are less likely to hit the fast forward.”

Networks continue to work toward lowering ad load. When Paramount Network launched last winter, Kevin Kay, president of Paramount Network, CMT and TV Land, told reporters that Waco, Yellowstone and American Woman will all have reduced ad load. With that, Yellowstone is experimenting with ad types. During the series premiere on June 20, Ram trucks takes over an ad pod with a 60-second spot featuring interviews with the cast and then a Ram ad. A line of copy before the segment says: presented by Ram. There’s also a product integration aspect—several of the show’s characters will drive Ram trucks with the Yellowstone logo.

As for other networks, Fox recently set the lofty goal of reducing TV ad time to two minutes per hour (down from 13 in 2017) by 2020 and NBC Universal plans to cut the number of advertisements in its commercial pods during original primetime programming by 20% starting in the fourth quarter.

The hope is that less ads mean viewers stay tuned for the ones that remain. Anecdotal evidence shows promise: Paramount Network’s Waco dropped its ad load by half, to 9.5 minutes for the hour while FX’s American Crime Story: Versace, which aired at the same time,kept it at 15.8 minutes. Waco’s commercial retention was 92 percent compared to Versace’s 88 percent.